I have fessed up to having an itsy bitsy teeny tiny sweet potato addiction, and when I came across this recipe in one of the blogs I read, I had to drop everything and give it a try.

I have tried black bean brownies in the past, and found them kind of blah, but sweet potato brownies had never even crossed my mind. The sneaky part of me thought maybe, just maybe, I could get these past 2Chili and he wouldn’t know there were sweet potatoes inside. I mean, they look like brownies, right?

And, for the most part, that’s true. He didn’t notice the sweet potatoes. What he did notice, though, was the coffee taste. 2Chili doesn’t like coffee. And, while I do like coffee, I have to say, I agreed with him that the flavor was just too much. When I make these again, I am definitely omitting the instant coffee powder. With even just 1/4 teaspoon, it was pretty overwhelming.

Coffee powder aside, the brownie result of sweet potatoes and cocoa is quite lovely, and oh-so-ooey-gooey. If you have kids, I am pretty sure you can make these, omit the coffee, and they won’t even notice a difference between these and “normal” brownies. Sneaky, sneaky. You can rub your fingertips together and say “mwu-ha-ha-hah” to yourself as they devour them.

I made these to the original recipe almost exactly, but I cut the sugar by half. Instead of 1 cup, I used 1/2 cup, and it was plenty. I read a tip somewhere (boy I start a lot of sentences that way) that you can reduce sugar in most baked goods by half without even noticing it, and, it was true in this case. I think you could even do a little applesauce switcheroo with half the butter and come out fine as well, but didn’t try that myself this time.

Lastly, to speed up the sweet potato puree process, just peel and cube a sweet potato, add it to a microwave safe bowl and cover with about a cup of water. Microwave on high for 3 minutes, drain, and puree. One medium potato provides exactly 2/3 cup. Simple as pie.

Nutrition:
This is for the recipe exactly as specified in the original, but with half the sugar. I usually don’t include all the info on the vitamins, but check out the vitamin A and iron percentages. Pretty good for a brownie! 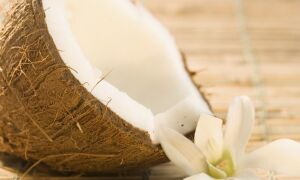 How to Make Coconut Milk, Shredded Coconut, and Coconut Oil in the Ninja Blender…and Get Coconut Water Too!
Reminder: Have you entered my 500,000 Page View Ninja Pulse giveaway yet?...
Recent Comments
Recent Posts