What I Learned During “No Meat November”

Since Test Kitchen Tuesday didn’t exist when I started doing a little experiment I dubbed No Meat November, you may be scratching your head a little on this one. And, you may think I have a thing for slightly imperfect alliterations…

Despite our short history together, I reckoned the outcome of NMN was worthy of discussion, so I wanted to share a little with you, and hear any comments if you have dabbled with (or maintain a) meat-free diet.

Why No Meat November?

In my case, it’s really a fairly simple reason: I read a lot of vegetarian and vegan-focused food blogs, and they are so interesting and thought-provoking that I have been weaning down my meat consumption considerably without really trying. It has been sort of a side-effect of the blogs I read, as I’m always trying new vegetarian and vegan recipes.

I know for a lot of people, deciding to temporarily or permanently eat vegetarian is a big decision with lots of very important reasons behind it, but I think it was just sort of a natural progression for me. I do consider animal rights and environmental issues very important; however, in this case, those items weren’t the driving factor.

I have never really been that big of a meat eater, though I do confess to enjoying a good hamburger now and then. 2Chili, on the other hand, is definitely a meat eater. So, the real challenge of No Meat November was not what to feed myself, it was what to make so that we would both be happy. I had no intention of inconveniencing him if I could help it, and I think for the most part, I succeeded.

How Did it Go?
No Meat November was surprisingly uneventful. I reckon this is because I was already eating very healthily, that the omission of a small fraction of my diet didn’t really change anything. General observations:

Moving Forward
The natural next question is if I’ll keep this up or not. I have thought a lot about this and don’t have a great answer. I feel good, have not been inconvenienced in the slightest, and our grocery bill went down. I decided to not put pressure on myself to make a firm decision, but rather, do whatever feels natural over the coming months. If I eat meat, it will be because I want to, not because I feel some sort of social pressure.

What about you? Do you, or have you tried eating a vegetarian diet? Do share your experiences!

The Carrot Monster
First order of business: Have you entered my drawing for a...

The Accidental Yogi
I used to do things all wrong: I grocery shopped on... 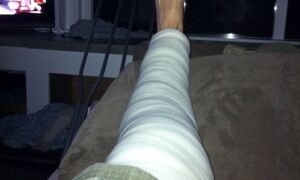 Broken, But Not Beaten
Friends, I have unfortunate news to share today. I can’t...
Recent Comments
Recent Posts