A Swim Across Lake Washington

I have a really great recipe for you all tomorrow (I think), but today, I wanted to share what I did over the weekend, aside from the usual remodel chores. I don’t share weekend activities all that much anymore because it’s generally more of the same: Remodel, remodel, remodel. Don’t worry, we’re getting super close to having a kitchen and this remodel will almost be done.

Those of you that have been reading the blog for a while might remember that I like to do endurance events. Over the last year, as I’ve worked hard to get back to normal after breaking my kneecap last summer, I have really missed having a goal. Aside from the ongoing pain, the hardest part really has been sitting out on the things I love to do, especially triathlon. While I’m not ready to lace up for a triathlon yet (hopefully next summer!), I did have an opportunity to do a really cool endurance event over the weekend.

It wasn’t a race, but the Park to Park open water swim across Lake Washington was exactly what I needed. The distance? 1.40 miles, if you swim it straight. I am very certain I didn’t swim all that straight, so I figure you can slap an extra tenth or two onto that distance. I had been training for about a month – meeting a co-worker before work a couple times a week. Nothing like starting your day with a 6 a.m. dip in the lake, right?

Today was an absolutely gorgeous day for a swim in Seattle. How can you get better than this? 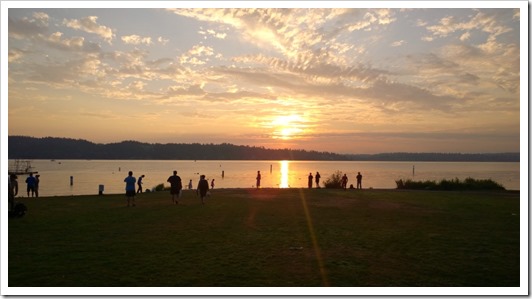 As I was swimming across the lake, I was reminded of what I lucky girl I am. In the summer, there are very few places as beautiful as the Puget Sound area. In the winter…well…that’s another story! Of all the races I’ve done (a lot) and all the crazy things I’ve attempted (also a lot), this has to rank up there in “coolness factor” in terms of how excited I was to participate, and how much I enjoyed the entire endeavor.

For some reason, I had the presence of mind while swimming to take it in and really enjoy it, instead of just being in a big hurry to swim so I could get on my bike, like in a triathlon. Some of this probably comes from having a totally different perspective now. I was just so thrilled to be able to participate in an athletic endeavor, I really took it in. A change I perspective is a good thing every now and then, even if it comes as a result of a less than ideal situation! Adversity can truly be opportunity.

I have no idea why I look so surprised, but here we are at the start! Swim caps are not all that flattering, huh? 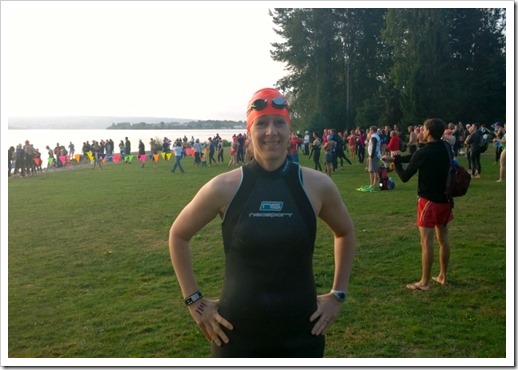 How far is 1.4 miles in the water? A lot farther than you might think! I compare swimming to running at a ratio of 1:4. One mile swimming is really comparable to four miles running. So, this was fairly comparable to me as a 10K running race, though I have always been a bit faster of a swimmer than runner. I  put a star over the spot where we started, which was Matthews Beach Park in Seattle This picture was taken from the side where we exited, O.O. Denny Park in Kirkland. 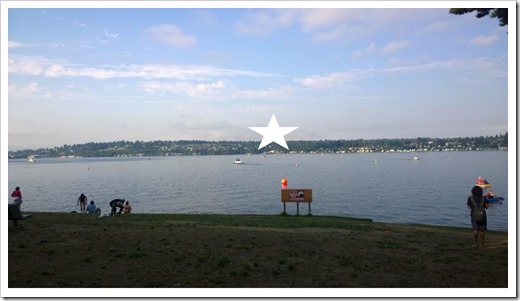 If you live in the Northwest and like to swim, I can’t recommend this event enough. I have always wanted to swim across Lake Washington, but it’s logistically challenging as an individual  because you need a guide boat. It was super fun to swim across with 300 other people and not have to worry about being plowed over by a motorboat. The fact that it was a fundraiser for Seattle Children’s Hospital was just icing on the cake.

It’s race season, so who else out there had a fun event or race over the weekend?

Are Organics Worth the Cost?
Wow, that’s a loaded question, huh? There are so many...

One Month of Test Kitchen Tuesday – 2Chili Speaks
One month ago today, I wrote my first post on...

Measuring Success: Why You Need to Count Calories to Lose Weight
Happy first Monday of the New Year! I hope you...
Recent Comments
Recent Posts