I don’t have a new recipe for you guys this week, but I do have some food for thought. The topic at hand is truthful advertising, and how advertising agencies (and the businesses that pay 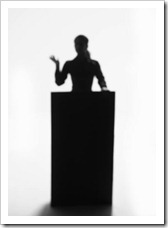 them the big bucks) use words and loopholes to make you think something is different than it really is.

As a marketing writer by day, I know a little bit about how word choice influences perception. Highlighting certain positively-perceived attributes and overlooking other, more negatively-perceive attributes can sway a person’s opinion about the quality of an item. Words are power, but so is knowledge.

I don’t typically like to stand on a soapbox and broadcast my views around these parts. But, last week I saw a commercial so misleading in its intent that I had to speak up!

I make no bones about the fact that 2Chili likes cereal, and, I don’t prevent him from buying whatever cereal his heart desires (which for the record, has been Trader Joe’s Mini Wheats for years now). Personally, I have pretty much given up on boxed cereal with the exception of plain oats, because most commercially-made cereals are just overly-processed and full of sugar. 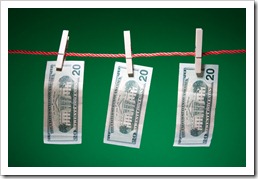 Here’s my stance on the matter: To a degree, it’s fine if cereal makers want to over process and pump their products with sugar – this is what the cash-wielding public wants from their cereal, so the manufacturers are just delivering a product that will sell. They do run businesses, after all, and the principle of supply and demand is in full effect. However, using misleading tactics to promote said sugar-laden cereal is really crossing a line.

The ad I saw was from General Mills, promoting that all their “Big G” cereals have more whole grain than any other ingredient. Immediately following this statement, a nutrition label was quickly flashed, in which whole grain was the first ingredient. Packaging standards require the ingredients in a food product to be listed in order of their prevalence in the product.

Not so much. Look at the next few ingredients in this label from the commercial: Sugar, Modified Corn Starch, Honey, Brown Sugar Syrup, Salt. Of those five ingredients, three are sugars! 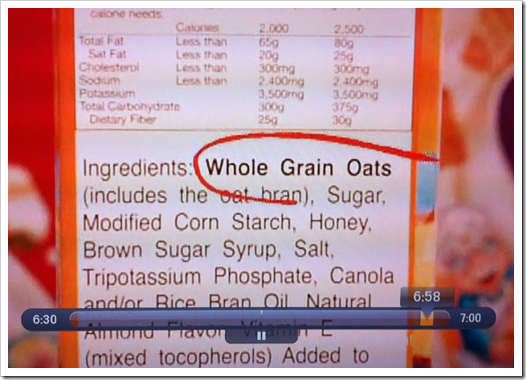 If all the sugars were considered one ingredient, sugar would be the largest single ingredient. And sadly, this protocol of using more than one type of sugar in packaged food is not uncommon – who would wants to list “sugar” as the first ingredient in anything “healthy” they are trying to sell to a weight-watching public? That would go over like a lead balloon!

So, next time you are swayed by box-front call outs (fat free, whole grain high fiber, etc.), keep in mind that food manufacturers have a very small window of time to sway your opinion on whether or not to purchase their product, and are relying on current buzz words to quickly grab your attention with the hopes you won’t look deeper at the actual ingredients. list. If you choose to buy packaged food, that is your decision (and we all do it!), just do so in an informed and educated manner. Look at the ingredients list and determine for yourself if you are comfortable putting those ingredients into your body!

Are Organics Worth the Cost?
Wow, that’s a loaded question, huh? There are so many...

One Month of Test Kitchen Tuesday – 2Chili Speaks
One month ago today, I wrote my first post on...

Measuring Success: Why You Need to Count Calories to Lose Weight
Happy first Monday of the New Year! I hope you...
Recent Comments
Recent Posts