Here is the scenario, which I have heard so often over the years: The Ninja commercial makes it appear as if you can turn fruits and vegetables into a smooth, drinkable juice in no time flat.

This, of course, depends on how you define juice. If you want a thick, whole food juice that retains the pulp, then yes, the Ninja can absolutely perform if you know how to make it do its thing.

However, if you want pulp free juice, you  have to strain it, or, use a juicer.

That said, this week’s request has to do with carrot juice. Reader Dana saw a demo of a Vitamix recently where the person performing the demo turned baby carrots, lemon juice, and ice into a nice, drinkable whole food juice, and she hasn’t been able to get the same results with her Ninja Mega.

Spoiler alert: The results were pretty much identical.

Spoiler alert #2: Though drinkable, the results were not quite what you would get with a Vitamix. They were not bad, per se, but, just slightly different.

Here’s what I did, for those interested in specifics:

1) Found some baby carrots (this is what Dana said the Vitamix demo guy used).

2). Put half the bag in the Ninja Ultima and half in the Ninja Mega blender 72 ounce jars and added an  equal-ish amount of ice.

The deal with Ninja blenders is you have to add ice to whole fruits/veggies if you want a drinkable “juice.” Otherwise, you just get chopped pulp! I explain more about this here.

4) Pulsed 4-5 times, and then slowly increased blending speed until I was blending on high in both machines.

I determined I needed to add some water when all I had was basically a carrot snow cone, so I added about 1/4 cup of water to each, and resumed high speed blending.

5. Very soon after adding water and resuming blending, the concoction came together and I deemed it juice. Total blending time pre- and post-adding water was about 1 minute cumulative.

Though, as you can see, there is still the thickness of the pulp in there – there is just no way around having some pulp, since the blender does not extract it.

The results, place in front of their respective blending machines. Don’t be fooled by the one on the right being a little more puffed up – their textures are almost identical.

I was able to drink both of these with minimal chewing (I always chew my juice and smoothies, though). Is it as good as a Vitamix? Probably not quite. But we’re talking margins. Just like the Ninja, the Vitamix is a blender, not juicer, so the pulp doesn’t just evaporate, but you can likely get a bit of a finer consistency due to the blade design.

Have a reader request? Let me know in the comments!

A Little Nutty–Using Up Nut Butter in Style
I think I am late to this party. But, I’m... 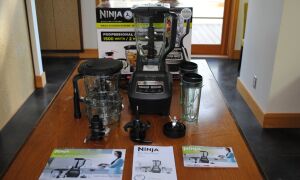 Ninja Mega Kitchen System: Full Review
I recently spent a week in a vacation home in...
It’s Not Clean…Until it’s Oxi Clean? How to Easily Clean Stainless Steel Pots and Pans
Happy Saturday, Friends! No links this week, but, with it...
Recent Comments
Recent Posts