2ChiliBreadBowl loves onion rings. Personally, I could take them or leave them (well, mostly leave them). But, for his TKT this week, I wanted to make something special to make up for him having to drive to and from Tahoe for our vacation. So, I figured a tuna melt and onion rings would do the trick.

I have never tried to make baked onion rings before, but 2Chili famously tried about five or six years ago. I say “famously” because it was a disaster. By the time he had them “breaded” he was frazzled, and the onions were basically just haphazardly covered in clumped up batter. I think it’s possible that an entire roll of paper towels was used in the process, and I know that was the last time I remember 2Chili cooking something. I also know I laughed a lot. Whoopsie. What is that saying my grandma used to point out? Oh yeah:

What goes around comes around.

Tonight, my fingers covered in batter mixture and my onions most definitely not wanting the breadcrumbs to stick, I could so relate to him.  I don’t think that it was the recipe’s fault in this case. We must both be inept when it comes to making baked onion rings. This attempt was not quite a disaster, but, it was not that good. My onion rings looked nothing like the originals, so I blew it somewhere. You win some, you lose some. Tonight, the onions won.

He did note that these were much better than his failed attempt, which would have had a negative score.

While ugly, I thought these were pretty tasty. But, then again, I am no onion ring connoisseur. I didn’t intend to have any, but ended up eating quite a few.

Nutrition: The nutrition info is provided in the original recipe, so I’m not going to calculate it out here separately. It’s really pretty good, as far as onion rings go.

The Verdict: Since these tasted good, I will probably try making them again. The biggest issue was that the breadcrumbs kept getting clumped up due to the batter that inevitably leaked into the crumb bowl, so I may try more of a sprinkle technique instead of actually putting the dipped onions into the breadcrumb bowl.

My backseat driver barstool chef kept saying that Guy Fieri insists the batter must be very cold, but both my onions and batter mixture were very cold, so I don’t think that was the issue. Lastly, I think it may work better with panko breadcrumbs, so I might try that as well.

If you have any tips for making baked onion rings, do tell!

Test Kitchen Tuesday For One: Veggie Yakisoba, and Café Flora Cookbook Winner
Wow, that was a long title! First and foremost, let’s... 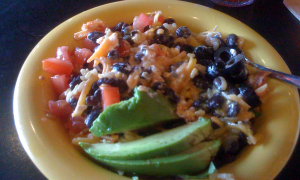