A Weekend in L.A.


Friday I hopped on a plane and flew down to Southern California to join 2Chili and see the last two stages of the Tour of California bike race. What a great weekend!

Here is a shot of Mt. Rainier I took from the air on the way out of town.

We had a really fun time following the bike race, and did a crazy (perhaps certifiably so) 17 mile hike on Saturday. We walked 8.5 miles uphill and 8.5 miles downhill on Mt. Baldy just outside of Claremont to watch the race! I was surprised when I downloaded the data from my Garmin and we had climbed and descended 4,300 feet on the day – that is a lot of vertical on foot!

Sunday, we decided to treat ourselves to a Los Angeles tradition – Sunday brunch. We usually try to stay at hotels with breakfast included, like Hyatt Place or Hampton, and even though our hotel had breakfast, we decided it would be fun to go have “real” breakfast. We settled on a place called Jinky’s in Sherman Oaks, which was somewhat on the way to the start of the race from our hotel. Interestingly, they are known for their 20 varieties of chili, and we had no idea of this beforehand. It was 2Chili heaven.

The sign says it’s better than breakfast in bed. They weren’t kidding – this somewhat unassuming restaurant in a strip mall was fast, friendly, and delicious.

As we know, I’m fond of pancakes – so I went with the special of the day: Apple almond pumpkin pancakes. They were so good, I am determined to recreate them at home – so stay tuned for that!

We had a huge day of driving and walking and driving some more in which we covered a lot of ground from Sherman Oaks to Santa Clarita to Thousand Oaks to Hollywood to Burbank and back to Sherman Oaks. In the middle of all that, we watched the race and cheered for the boys. I even scored a few discarded water bottles as souvenirs. When the bikers get a new bottle of water from their team in a feed zone, they toss the old ones aside, and, if you’re in the right place and time, you can get an instant souvenir.

At the end of the day, we were beat, and honestly, could barely walk. Turns out such a big hike on Saturday left us both sore and the pain set in slowly over the course of  Sunday. When we finally stopped moving, it was to have a California staple: Bob’s Big Boy for dinner.

It turns out the Bob’s Big Boy is a double beef burger similar to a Big Mac for those that didn’t know (like me), and apparently the restaurant’s original owner created this concept. They had plenty of veggie options on the menu, which we had researched ahead of time  (thank you iPhone). I settled on a veggie burger, which seemed like a Gardenburger, but was quite good after a long day, and it included plenty of fresh avocado.

We enjoyed our dinner, limped back to our car, and called it a weekend. Back to life in soggy Seattle where we belong!

Have a good week! 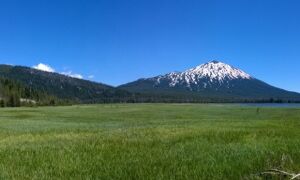 Vacation Travelogue–Bend, Oregon
So, I’ve been on vacation. I don’t do that enough....
Recent Comments
Recent Posts