This was an odd week. In a good way!

2Chili and I took a much-needed mini vacation to Utah to ski for a few days. We have history with Utah, though Utah may disagree that it has history with us. A few years ago, after we finished and sold our first remodeled house, we packed up the farm (and the cat, much to her dismay) and relocated to Park City for a winter. In fact, we came this close to buying a house there. Thankfully the mortgage broker we were using was incompetent, and that caused us to reconsider and led us home to the Emerald City, where we belong, at least for now.

That winter (‘06-‘07) turned out to be the worst winter in 30 years in terms of snow fall in Park City – meaning, there wasn’t much. Needless to say, for a couple wannabe ski bums, that wasn’t ideal. We called it quits on the ski bummning in February that year and moved back to Seattle, and have since completed another remodel, though this one isn’t going on the market anytime soon.

Enough time has passed that we are back on speaking terms with Utah, and, we just had a fantastic vacation there. If you’re interested in skiing, I put up some pictures over here.

Moving along – the budget! I am excited about this. We came home to a pretty empty pantry and fridge yesterday, and I managed to squeak in just under budget after a trip to Trader Joe’s. It should be known that I don’t consider math my strong suit, and somehow I managed to tally up my total in my head as I went. High five! Fist bump?! Or, maybe chest thump? No matter your celebratory rituals, let’s just say the shopping trip was successful.

Menu for this week

For the rest of this week, I’m going to play it by ear and decide on a day-by-day basis. Crazy talk! I plan to make the Baked Ziti again over the weekend because I  had leftover cashew cheese, and expect we’ll probably have a Panini night and a pizza night along the way.

Interestingly, this week, I didn’t even bother with an Amazon Fresh order. We needed several things that are dramatically cheaper at TJ’s, like pasta sauce, tomatoes, Greek yogurt and veggie broth, so I just bought everything in one place. It was kind of nice, but I remembered quickly that I enjoy having my groceries dropped off on the porch when I tried to bring everything in from the garage in just one trip.

Also, you can tell a lot about someone from their grocery order! It is clear I live up to the “Sodium Nazi” nickname 2Chili gave me, as I buy everything with “no salt added” or “low sodium.” But you know what, I must be rubbing off on him, because the first thing he does now is check labels for sodium content, and then reads the ingredients to see if he can pronounce everything listed. We are making progress in the Test Kitchen household!

But enough about me. Check out how other bloggers in the Project: Food Budget endeavor are doing: 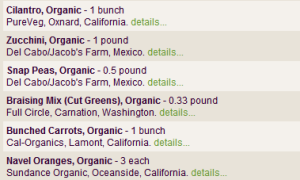 Project: Food Budget–Week 14–A Case of Mistaken Identity
Do you ever have those times when you know you...
Recent Comments
Recent Posts